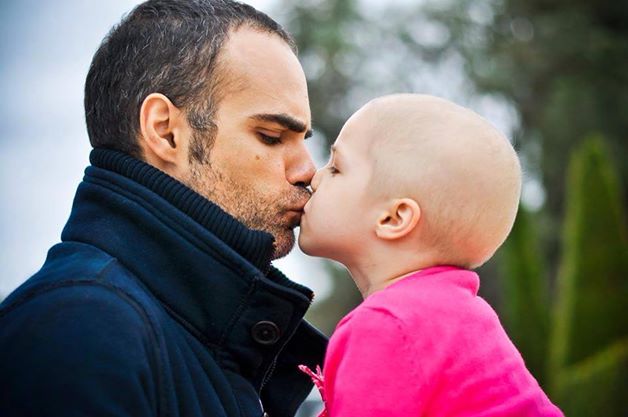 “Be the change that you wish to see in the world.” Mahatma Gandhi

What is “Be The Difference Today”?

Using the “Be The Difference Today” grid. 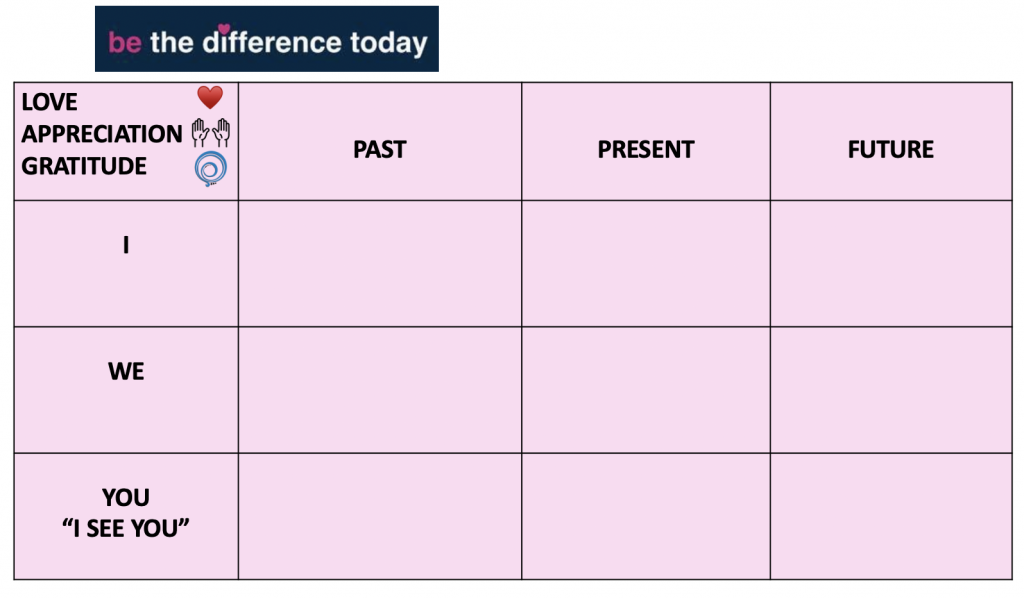 “I See You” – The “Be The Difference Today” movement.

BEING THE DIFFERENCE TODAY:

I was packing for a family holiday to Disneyland Paris when I got a message on Facebook from my good friend Jorge Coutinho who I have known for many years as a fellow volunteer in the Tony Robbins environment. I was tempted to ignore his message. I was tired and wanted some sleep before an early start the next morning. But I knew that over the previous months that Jorge’s daughter Leonor, who was five years old at the time, had been receiving treatment at a local Portuguese hospital for kidney cancer and secondary lung cancer.  Leonor was his princess and she loved pink. Leonor the pink princess. I hadn’t heard from Jorge for a while so answered his message. His reply stopped me in my tracks.

He told me that the doctors in Portugal had said that Leonor’s cancer was now terminal and that all they could do was to ease her pain until she passed. I am a father of four children and also have two stepchildren so can’t even comprehend what hearing that news would be like to a parent. But there was some hope. Jorge explained that there was some revolutionary treatment in Germany that might help Leonor but that it would cost about 30,000 Euros. He had spent a lot of money helping Leonor to that point and he needed help raising the money to get her to Germany. He told me that I was the first person he thought of to help raise that money. He told me that they needed the money now. Time stopped still for me in that moment. Why me? I can’t do this. Can I do this? I must do this. I told Jorge to leave it with me and I promised I would raise the money for him and Leonor.

I have achieved a lot of things in my life that I am very proud of, but I have never, in any of my previous forty-four years, had to do something so important. I knew that I couldn’t do this alone and I knew that I had to deliver on my promise to Jorge. I emailed people, I posted on social media, I set up a GoFundMe account and I shared from my heart the story of Jorge and Leonor. I kept people updated on what was going on with the fundraising effort and how much more we needed, and I thanked everyone for their help and support.

People stepped up in ways that I still struggle to comprehend. Leonor was touching people with her story, her bravery and her message of love and within five days we had raised the 30,000 euros. We had got Leonor on a plane to Germany within a few days of Jorge’s original message. After eight days we had raised 40,000 euros and we had to ask people to stop giving money, as we didn’t know at that stage what we would do with it. Leonor got the treatment she needed in Germany.

I would like to tell you that this story had a fairytale ending for Leonor, the pink princess, but in September 2014 she passed away. My first thought was that I had failed her in some way, but I knew that wasn’t true. We had all given her hope, we had given the family precious time with her and she just wasn’t meant to physically be on this earth any more. I promised Jorge that I would continue to spread the message of Leonor, the message of bravery, enjoying life and of love. Leonor’s journey also taught me the message that we can all be a difference in this world when we choose to commit to something. Jorge continues to spread the magic of the pink princess to this day, and I would like to tell you a little more about my journey since September 2014.

In October 2014 I was serving as a trainer at a Tony Robbins event and towards the end of these events we raise money in our teams for the Anthony Robbins Foundation. One of the main things this charity does is to run an event called Global Youth Leadership Summit. The Anthony Robbins Foundation Global Youth Leadership Summit is a five-day program that provides participants ages 14 to 17 with an environment designed to boost them into leadership roles that will change their lives and communities. This brings together young people from all over the world and is a cause close to my heart. I spoke to my team, team 5, about Leonor and how contribution had changed my life. I am proud to say that my small but mighty team of just over twenty people raised $38,872 in a matter of minutes. This was nearly three times the next highest total amongst the other 11 teams. I’m not saying this to brag but I’m saying it to show what happens when people connect with their heart and step up.

The head trainer for Tony Robbins asked me to share what I had done at the next event in December. The next event, Date with Destiny, was a much bigger event (about 3,000 people) and we had 38 teams at that event. Each team on average having a little fewer than 70 people in each team. I spoke with the other 37 team leaders about Leonor and to look within themselves for how they could be the difference for their teams and connect the participants with the power of their heart. My team, team 21, was a Japanese team so I asked one of our leaders Chris Okazaki to talk about the Anthony Robbins Foundation. I shared what it meant to me and Chris would in turn share in his own way. Japanese culture is not traditionally one where charitable donations are commonplace and Chris also explained that sometimes his fellow countrymen struggle to express emotions. It felt right for him to share from his heart to his countrymen what contribution meant to him. When Chris gave his speech in Japanese I listened to the live translation and I cried, and so did many of the Japanese participants. Chris not only spoke to our Japanese team but the other two Japanese teams. The core of Leonor’s message had now spread to Japan. Thanks to Chris, our team again raised the most money – $173,380. All of the Japanese teams raised over $350,000 and the whole event raised approximately $1,300,000. All of this in just a few hours. This was a record for a Tony Robbins event.

The following year, I couldn’t attend a Tony Robbins event in Australia, so I passed on this information remotely. They set a record for raising money at an Australian event.

My last time delivering this message at Tony’s Date With Destiny event in 2018, something remarkable happened. Usually, I would speak for 15-20 minutes at an event about contribution but on this occasion our speeches were cut in half while we were delivering them. I got mad. I went on a rant. A contribution rant. Towards the end someone raised their hand. I was trying to cram in what I could, and it wasn’t that convenient! Thankfully I stopped and one of our team members apologized for interrupting and offered to donate $10,000 if the team as a whole met that total. Another member offered to do the same. Things snowballed. Our team raised $107,086 from a 10-minute talk! About 2.5 times the second-place team.

So why do I share this information with you? I felt that Leonor’s message had a wider audience. I greatly admired a gentleman by the name of Alex Sheen who had created a movement called “because I said I would” which focuses on honoring your word. I felt that Leonor’s message of love, bravery, enjoying life and being the difference for others was important to share in a similar way. In Xmas 2014 I was driving to pick up my children and it suddenly came to me – “be the difference today”. I wept as I drove along the road and I knew that I had come home. I knew I had to share this message with the world.

So, what is “be the difference today”? It’s not about making a difference, although that might be the outcome, it’s about how you show up as a person. It’s about sharing love, appreciation and gratitude to yourself, groups you belong me and others. How you are the difference. I believe that it helps people to become more present, to feel more fulfilled, to slow down and create more powerful connections with other human beings. It divides into three areas:

The “Be The Difference Today” Facebook group is here: https://www.facebook.com/groups/bethedifferencetoday/

“Being the difference” businesses will be more profitable, have higher levels of employee wellbeing, have higher team retention, hire the right team members more easily and create stronger customer relationships.

I must take this message into the business world. It will change lives, companies, communities and countries:

Thank you for reading this message.

Founder of “Be The Difference Today”

You can be the difference

Please spead the word. Be the difference today.